by vanessaalexandra on July 30, 2013 with Comments Off on Get Locket @ERoundtable 60 comments Ad Tech, Entrepreneur, ERA, getlocket, startups

Last night was ER 60, the Entrepreneurs Roundtable event founded by Murat Aktihanoglu.  The roundtable includes a guest speaker from the venture community and then up to five companies are allowed to pitch.    The speaker asks questions and provides feedback, the audience also asks questions.  Then there is networking.

At ER 60 the five companies that pitched varied greatly, from hardware, big data, and sensors, to fashion, ad tech and mobile.  The one I would like to discuss is GetLocket.com.  Available in the Google Play store.

The ad tech space is huge and is usually accompanied by this famous slide to express how complex it is: 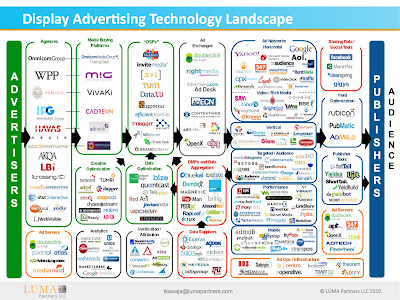 When Yunha Kim began her four minute pitch, she talked about her idea of engaging users on their habit of unlocking their phone.  Sell the ad space and pay the consumer every time they unlock their phone.  How cool is that?  If people unlock their phones 40, 50 or 100 times a day and they get a penny for every time they unlock their phone, then they can earn money passively and eventually redeem their dollars, apply them to purchases or donate to a charity.
This app also leverages your location to create targeted offers.  They are still early and just released 10 days ago.  In this short window, they have had over 10K downloads and have had over 3M impressions.
The audience did ask – what are the barriers to entry?  The founders are aware of this and are working to create stronger barriers to entry.  Though she did comment that it did take time to build this technology properly.
Good to see an early stage company out of the gate, doing well and they also have great investors.
Go to the next Entrepreneur Roundtable, see interesting early stage companies and learn something from the main speaker.

Working with a wonderful group of angel investors, my cultural education of ...

What to Look for in a Startup Company

Time and Energy for your Startup

The number of pitch and startup events has exploded in New York.  It used ...

NYTM  Just go.  New innovations and startups are fun.  This was one of the ...

Your application for funding: Do’s and Don’ts

Your application for funding is a first impression to investors who have ...